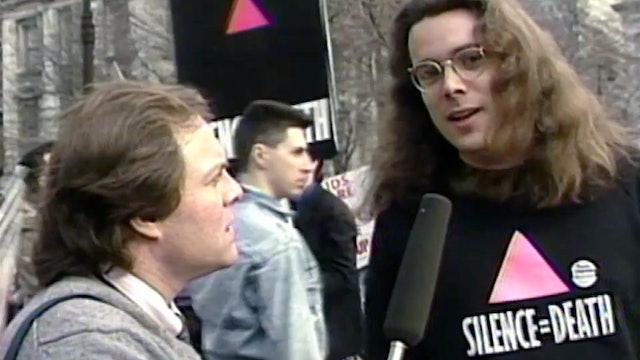 United in Anger: A History of ACT UP

UNITED IN ANGER: A HISTORY OF ACT UP is a unique feature-length documentary that combines startling archival footage and interviews that put the audience on the ground with the activists of the ACT UP Oral History Project. Filmmaker John Hubbard portrays ACT UP (the AIDS Coalition to Unleash Power) from a grassroots perspective, examining how a small group of people of all races and classes came together to change the world and, ultimately, save each other’s lives.

The film takes the viewer through the planning and execution of major actions including Seize Control of the FDA, Stop the Church, and Day of Desperation, with a timeline of many of the other actions that forced the U.S. government and mainstream media to deal with the AIDS crisis. UNITED IN ANGER reveals the group’s complex culture: meetings, affinity groups, and approaches to civil disobedience mingle with profound grief, sexiness, and the incredible energy of ACT UP.